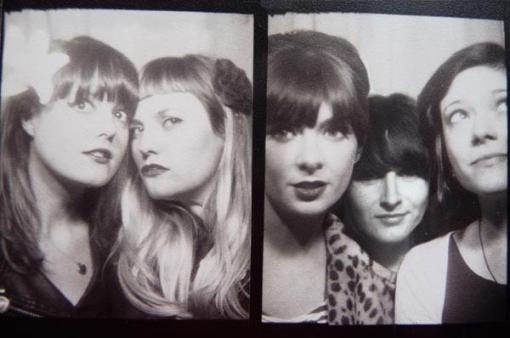 I’m gonna make this quick. It’s almost irrelevant already, but you deserve a chance to get in on it while supplies last. Soft Power Records, the tiny Scottish indiepop label I mentioned a few months ago have a new release out. The band is Dublin garage pop outfit September Girls and the release is “Wanting More”, a super-limited 2-track cassingle (for those who don’t know, that’s a cassette single).

September Girls are the first all-girl band to be released on the Soft Power label. The guitars are dirty and noisy. The harmonies are sweet. If the Crystals had been a garage band it would have sounded like this.

Fans of Phil Spector and the fuzzier side of indiepop will love this. And those of you who do, had best get on top of it, because this Soft Power release is limited to 100 copies (30 in yellow, 70 in blue). Of course, you can’t get the yellow ones anymore. They sold out on Monday, the day of the release. But, last I heard, there were still some blue ones left. . And, for those of you bound for Indietracks this summer, the good news is, September Girls were recently confirmed to play.

EDIT: A few hours after posting this, the Soft Power store sold out of September Girls cassettes. The remaining copies can be found at: Rough Trade, Norman Records, Monorail Music in the UK, and Big Love Records, and The Stone Records in Japan. Good luck.

View all posts by Eric

One thought on “September Girls will leave you Wanting More”