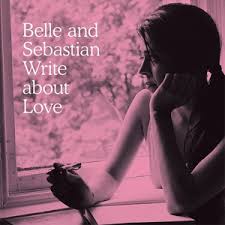 Occasionally, I find myself muttering things along the lines of “it’s about time for ______ to release another album”. I try not to say these things too often because I, like most of you (the discerning listeners I know you are), ultimately prefer quality over quantity and I’d hate for my favorite bands to put out something rushed and rubbish because they’re afraid I’ll start snatching up Justin Bieber records left and right if they don’t. That said, four and a half years after the release of The Life Pursuit, it really is time for Belle & Sebastian to release another record. So I think you can understand what a relief it is to add Belle and Sebastian Write About Love to the rotation.

As with any Belle & Sebastian release, there are a handful of people who are once again irate that the band haven’t slapped a new cover onto If You’re Feeling Sinister and called it a day. For the rest of us who realize that fourteen years is a long time in the life of a band (Stuart Murdoch is 42 for goodness’ sake!) and that some changes are bound to happen, there is, instead, the search for that ineffable quality that makes a Belle & Sebastian record a Belle & Sebastian record. Most will, of course, find the answer they’re looking for by the conclusion of the album’s opener “I Didn’t See It Coming” with Sarah Martin taking on the bulk of the vocals. Those holding out for an even more vintage B&S vibe will be pleased with “Read the Blessed Pages” which harks all the way back to the unreleased (to my knowledge) “Rhoda” and is, arguably, the most straightforward and personal song Stuart has put out in a decade.

Stylistically, Write About Love falls somewhere between the intricately orchestrated Dear Catastrophe Waitress and the more intimate affairs of the late 90s. Speaking of affairs, there is one holdover from last year’s excursion into God Help the Girl, namely the presence of guest vocalists. It’s not as if the band have never involved guest vocalists—who could forget Monica Queen’s epic turn on the inimitable “Lazy Line Painter Jane”?—but this time round, you might say the guest vocals have gone markedly upmarket. Most notably for casual fans of the mainstream is “Little Lou, Ugly Jack, Prophet John”, a duet between Stuart Murdoch and, believe it or not, Norah Jones. It’s a juxtaposition that’s jarring at first, but after a few listens, you begin to realize that there is in fact room for Miss Jones in the B&S aesthetic. More likely to go unnoticed is the title track, a healthy dose of northern soul with a hefty cameo by Oscar nominee Carey Mulligan bound to boost my Whovian crush on my darling Sally Sparrow by at least 47 points.

While “Write About Love”, with its pitch-perfect blend of Life Pursuit and God Help the Girl, is easily the high point of the album for me, there is more still to sate your obsession for the next few years. There’s the crisply soulful “I Want the World to Stop” and Stevie Jackson’s pseudo-psychedelic “I’m Not Living In the Real World”, both of which went over beautifully with the last night’s audience at the Chicago Theater. And on the old school front is the sweetly melodic “Ghost of Rockschool” and some priceless moments scattered throughout “Calculating Bimbo”.

Those of you who are regular readers probably know what I am going to say next. It’s my favorite thing about this blogging racket: the fact that I have absolutely no obligation to maintain any semblance of neutrality. You’re only reading this because you want to know what I think about Belle and Sebastian Write About Love and I’ve only bothered to write about it because I want you to know why I was able to listen to it six hours a day for the better part of a week. God knows I’ve never seen a penny from anything I’ve ever written here and I’m certainly not beholden to any of the parties involved with this album. To my knowledge, I have only ever been in the same building as Stuart Murdoch once, but he and the rest of the Belles have been in my head for years and to hear Belle and Sebastian Write About Love is pretty solid proof that they are still there. Like I said, ineffable.

View all posts by Eric

2 thoughts on “Belle and Sebastian write about love”